To the delight of 80 distinguished members and guests of The American Club of Hamburg e.V., the U.S. Consul General Richard (Rick) Yoneoka addressed the Club on Tuesday, September 12. In his speech titled “Post G20-Reflections on the Transatlantic Relationship, ” the Consul General spoke off-script and provided insights to this past summer’s G20 summit.

Rick and his wife Kathrin met the First Couple as they arrived on Air Force One, and was struck by their personable and friendly presence. This was the first time a sitting President has ever visited Hamburg. In his speech, the Consul General Yoneoka expressed the generosity of the Hamburg Senate to provide a location for President Trump and First Lady Melania to stay during the G20.
Despite the prevalence of protest events in the Schanzenviertel, little attention was given in the media about the successful, unanimous agreement of a Compact during the G20. A further highlight for the Consul General was hosting President Trump, President Abe of Japan and President Moon of Korea to a dinner meeting in the US Consulate.
But the biggest news during the dinner speech, to the delight of the American Club President, David Scott Zeller, was the Consul General’s announcement that The American Club will be able to once again celebrate its popular New Year’s Reception next January at the “Little White House on the Alster.” The much anticipated move of the US Consulate will be postponed until later in 2018.
Following his speech, Rick happily fielded many questions from the attendees, and expressed his thanks for being asked to address the Club over a deliciously prepared 3-course meal at the Park Hyatt Hotel in Hamburg. The Consul General ended his speech by saying that there is “only one truly American club” in Hamburg, The American Club, for which he proudly serves as Honorary President.zth 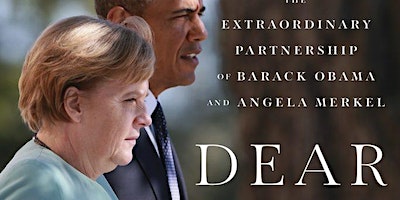 “Dear Barack” – the Extraordinary Relationship between Obama and Merkel